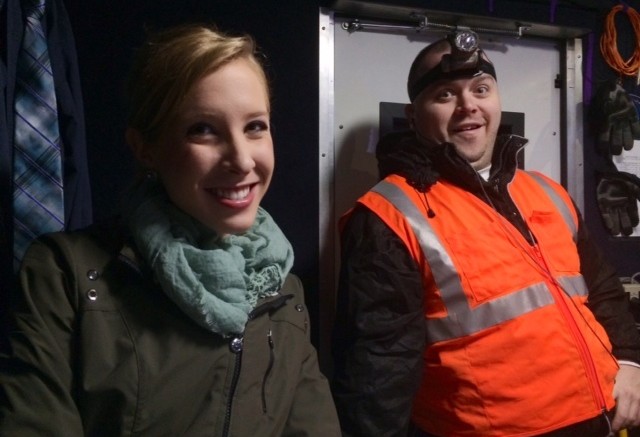 One day after two journalists were gunned down on live television, Roanoke’s WDBJ-TV resumed their morning schedule of programming with a moment of silence while the area outside the station’s studios has become a makeshift memorial.

Wednesday morning, Alison Parker and Adam Ward were killed by Vester Lee Flanagan II, who appeared on WDBJ as Bryce Williams. The 41-year-old Flanagan had posted on his Facebook page video footage that appeared to show the shooting from the gunman’s vantage point just hours after the shooting. Moments earlier, he had posted on his Twitter account that Parker made racist comments and that he filed an Equal Employment Opportunity Commission report. Flanagan later crashed a vehicle, and pursuing troopers found him with a gunshot wound. He later died in the hospital from the wounds.

Parker, 24, and her cameraman Ward, 27, died shortly after a man shot Vicky Gardner, head of the Smith Mountain Lake Chamber of Commerce, in the back and then turned the gun on the two journalists. WDBJ-TV said the shooting took place at about 6:45 am while Parker was in the middle of the interview.

According to the Roanoke Times, Gardner was taken to the hospital for surgery and is in stable condition.

The video of the shooting shows Parker screaming as she ran and could be heard saying “Oh my God” as she was shot. Ward’s camera captured a brief image, which included the suspect’s face, of the shooter before the station switched back to the on-air wide-eyed anchor.

ABC News later reported on its website that the network received a 23-page fax, a sort-of manifesto, from a person who identified himself to be Williams. The fax has been turned over to authorities and its details were not clear.

WDBJ-TV stated that Williams was employed by the station in the past but because of “anger issues” was fired in 2013. According to TMZ, Williams was also employed by a Tennessee station where he alleged racism before he was dismissed.

Lyons Mayor Christopher Getty honored by state crime fighters The Illinois State Crime Commission (ISCC) honored Village of Lyons President Christopher Getty as the “2016 Man of the Year” at it’s 20th Annual “Salute to Those Who Make A Difference” Award Dinner held June 15 at the Drury Lane in Oak Brook. Getty received the state crime fighting organization’s highest honor for his role in…

It’s about change, not Sanders, Trump or Clinton