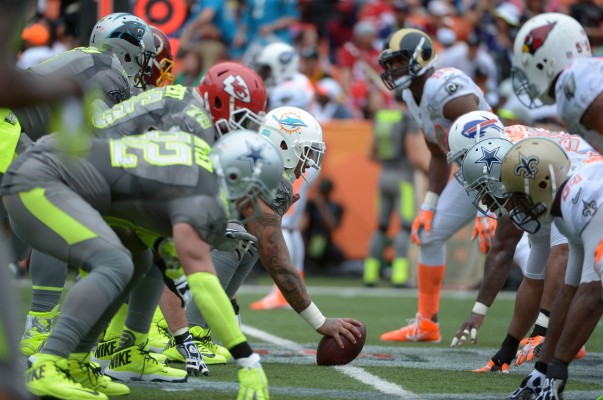 The NFL’s Pro Bowl game is this Sunday in Honolulu, Hawaii. The NHL All-Star Game is also being played this weekend in Nashville, TN. Although game is probably a loose-term for what actually happens in both instances. Last year at the NHL All-Star game a record-high 29 goals were scored, further exploiting how un-competitive the game has become.

This year the NHL has to deal with the John Scott nightmare. As you may or may not have heard, John Scott a little-known but very hard working and well-liked (by teammates, coaches & fans) was the top vote getter for the NHL’s fan pick and made captain of his divisional team. Although not the NHL’s hope, things got a little more tangled when John Scott was traded from the Arizona Coyotes to the Montreal Canadiens and then demoted to the minors. The NHL has reportedly tried to get Scott to excuse himself from the game, but he has decided to play. The game has now become a bit of a joke with John Scott’s All-Star jersey already sold-out, but rules are rules and John Scott will lead as captain a division that he isn’t even in.

The NFL this year is also struggling with players taking the game seriously, as of the 86 players initially named to the game; already 36 have opted not to participate. To be fair, 14 players left because they are involved in the Super Bowl, and rightly so, but that leaves 22 players that have back out for other personal reasons.

The most embarrassing of all, is that five of the six quarterbacks originally picked are out, leaving the “Pro Bowler” quarterbacks Jameis Winston, Tyrod Taylor, Teddy Bridgewater, Derek Carr, Eli Manning & the only original pick Russell Wilson. If you watch any football at all, you realize that these quarterbacks are not quite the best of the best that the Pro-Bowl should be.

It seems Pro-Bowl and All-Star games will be plagued year in and year out no matter how many times they try to change the format (which is almost yearly at this point). Perhaps we will finally see the extinction of such games in the near future, which people may not even notice since the players themselves barely even show up.

NFL Fines DeAngelo Williams For Raising Cancer Awareness On His Own

Judge Berman: No settlement on Brady suspension, will rule

The All-Star Break No One Has Been Waiting For

Cicero police charge hit-and-run driver who injured woman and 10-year-old child at 55th and Cermak Road on March 13 Cicero Police today announced that a suspect has been charged in the hit-and-run accident in which a woman and her 10-year-old god-daughter were injured near 5500 W. Cermak Road on March 13. The suspect is identified as Eduardo Gonzalez, 39, of 3611 S. 53rd Ave in…

Immigration, Jesus and the price of gasoline